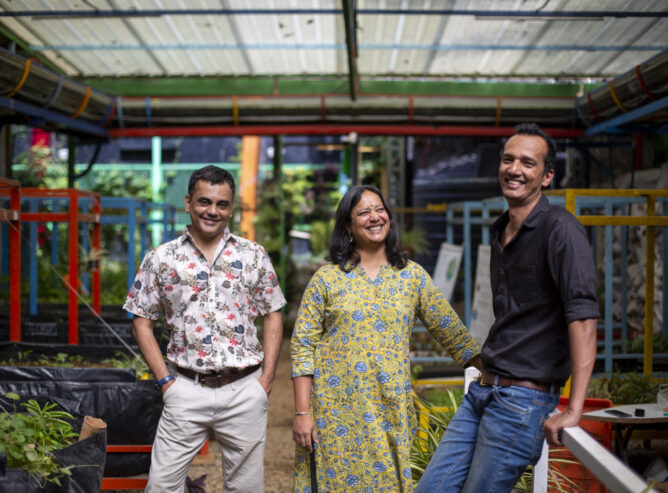 Vinuta Gopal, Sanjiv Gopal, and Brikesh Singh are three masters of their own crafts, driven by their shared vision of an aligned Indian civil society that is collectively progressing and contributing to India’s net zero commitment.

“Together, we are an ocean” is perhaps the inspiration behind the deeply collaborative nature of Vinuta, Sanjiv, and Brikesh. That was true when they were still strangers to each other, navigating the maze of environmental work in a sprawling and diverse country that is India, and it continues to inspire them as team members today.

The three previously had varying roles in International environmental organizations including Greenpeace, but it wasn’t until a few years ago they joined forces as part of the leadership team at the Bangalore-based social and environmental impact space organization called Asar Social Impact Advisors (Asar). There, they combined their decades of experience and began to push for change. While Vinuta is recognized for her strategic mind and ability to see a larger vision, Sanjiv is often credited for being a versatile strategist and expert facilitator and Brikesh brings the imperative creativity and innovation to the team.

Since founded only in 2016, Asar has pioneered and elevated their unique brand of generating “collective impact” through strategically connecting, empowering, and catalyzing the broad coalition of actors working closely to support efforts of local governments to reach a bigger purpose.

Their success has been credited by many of their partners to their tremendous ability to identify key partners, work across issue areas, and amplify the voice of the coalition—all from behind the scene. Take the Clean Air Collective as a brilliant example of them leading from behind: an unbranded vast network of over 150 civil society organizations, citizen groups, and experts progressively working to resolve air pollution with a presence in 12 states and 25 cities.

“We no longer have the luxury to work in our own silos and bubbles,” they say on how to address an exceptionally challenging problem like the climate crisis.

They find this type of approach—collaborative, networked, and unbranded—to be both necessary and effective in India, but their early-stage work has been largely project-based due to limited resources. They will use the US$3 million grant from their Climate Breakthrough Award to bolster and scale-up across several states—supporting sub-national efforts to reach India’s climate goals and emerging as climate champions. This could have an immense breakthrough potential given that India recently approved a series of ambitious federal climate commitments.

“We believe India has shown leadership on climate change and willingness to seize the opportunity to build a low carbon future. Our only mission is to support the country’s commitment, and our approach is to get everybody working together.”

They are truly well-positioned to advance their effort, but also cognizant of the fact that building connections and spaces for collaboration takes time, continuous investment, and willingness to nurture trust across stakeholders. “Yet this is the kind of work that we believe to be critical to ensure more ambitious and timely climate action,” they add.

This is the first time the Climate Breakthrough Award has been granted to a small team, instead of individuals, and to recipients in India.

Vinuta Gopal is the co-founder and Chief Executive Officer of Asar. She joined Greenpeace India in 2002, and went on to lead the Climate and Energy team for close to a decade and eventually led the organization as Program and Co-Executive Director. Vinuta co-founded Asar in 2016 and has since led the organization to its current size of 20 full time employees—supporting multiple consultants, networks and organizations addressing climate action. She has worked on the ground with communities, developed campaign strategies at the national and International level. Vinuta is also a student of classical Indian dance that she has pursued since her childhood.

Sanjiv Gopal is currently the Chief of Strategy and Planning at Asar. Prior to Asar, Sanjiv was Global Director for climate & energy at Greenpeace International. In this role, he was responsible for the formulation and overall success of an integrated climate and energy program across 40 countries. Through his career, he has worked on various environmental and social justice campaigns covering a wide spectrum of change and engagement. Sanjiv has also engaged with and played an advisory role as part of government outreach, providing inputs on strategy to donors and philanthropies on a wide range of issues relating to sustainable development.

Brikesh Singh is the Chief of Engagement & Communications with Asar. He has close to 20 years of experience in environmental campaigning, citizen engagement and fundraising including a tenure at Greenpeace. Brikesh has been on the frontline taking direct action to highlight the climate crisis and demand accountability from decision makers. Brikesh joined Asar in 2017, and his expertise includes conceptualizing, planning and implementing innovative and engaging mobilization strategies. His excitement lies in using new platforms to engage young people in the key social and environmental issues of our times. Brikesh is also a stand up comic and was an active member of the open mic scene in New Delhi before the COVID-19 pandemic hit.