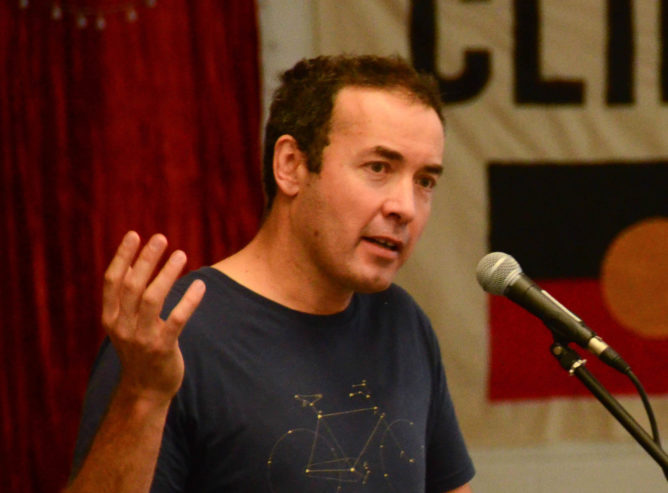 John is Executive Director of The Sunrise Project. He used his Climate Breakthrough Award to launch Insure Our Future, a global campaign to hold the insurance industry accountable for its role in the climate crisis. John built a coalition of organizations to pressure insurance and reinsurance companies to stop underwriting and investing in coal.

By just the end of 2017, 15 major insurers had divested US$20 billion in assets from coal. By 2020, the effort John launched with his award had resulted in half the world’s reinsurance industry adopting policies to stop underwriting coal projects. Also in 2020, because of the work John launched, Larry Fink, CEO of BlackRock, characterized climate risk as “investment risk” and committed to transition the company, which manages US$7.81 trillion in assets, away from fossil fuels.

To date, 37 insurers (over 15% of the global market for primary insurance) have adopted practices to stop limiting insuring coal, and John’s work has expanded to target financing for fossil fuels around the world. Following the success of his Climate Breakthrough strategy, John’s Sunrise Project has grown exponentially; the organization now receives and regrants tens of millions of dollars annually and has a team of nearly 200 spread across a dozen countries.

Before founding The Sunrise Project in 2012, John worked for a decade as a campaigner for Greenpeace and, before that, with Friends of the Earth. John is a serial entrepreneur and has founded numerous environmentally focused small businesses and side projects.

John is largely credited with developing and implementing a strategy to stop the expansion of the coal export industry in Australia. With the coal industry widely seen as a bedrock of the Australian economy, we were particularly impressed with the audacity of his ambition and his ability to systematically implement a long-term social movement strategy to achieve it.

John was thrilled by the opportunity Climate Breakthrough gave him to generate new out‐of‐the‐box campaigns to yield significant climate emissions reductions. He quickly started investigating a variety of ideas for new climate campaign interventions through a creative mapping process. After narrowing his focus to the financial sector, John decided to start by working to harness the power of social movements to shift insurance finance out of fossil fuels.