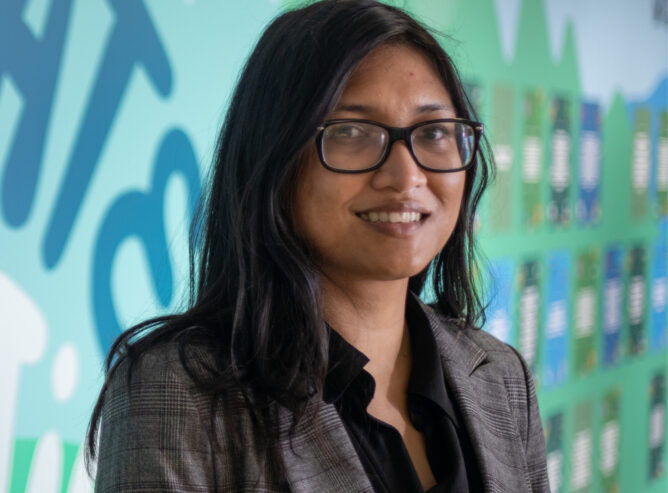 Sara Jane Ahmed is a finance advisor and strategist who sees transitioning to a resilient and clean energy economy as the path to prosperity for the countries most vulnerable to climate change.

Few people have Sara’s ability to dive deeply into the technical while continuing to foster and strengthen a larger vision. Sara has deep expertise in financial and energy markets and uses this technical expertise to engage senior political and financial leaders around the world directly and thoughtfully.

Sara envisions a future where the countries most vulnerable to climate change achieve prosperity by increasing resilience and driving a clean energy economy. Her breakthrough strategy is to catalyze economic transformation through investments in financial and energy planning in the world’s most climate-vulnerable countries. She calls this package of policies and financial mechanisms a Climate Prosperity Plan, or CPP.

CPPs include plans designed to unlock new investment opportunities in climate-vulnerable countries, in addition to an analysis of how the plans are financed, implemented, and projected to boost growth. Sara’s goal is, by the end of 2030, to create and implement Climate Prosperity Plans for the top 50 most climate vulnerable developing countries—representing an estimated 1,600 million tons of emissions, 1.4 billion people, and US$2.5 trillion in GDP. To make this vision a reality, she has launched a new organization, the Financial Futures Center.

The first Climate Prosperity Plan is being rolled out in Bangladesh, where the government has integrated it in their national strategies. Sara’s Climate Breakthrough Award will allow her to scale up this effort and take her groundbreaking work to other climate-vulnerable nations.

Sara Jane Ahmed is founder of the Financial Futures Center and currently also serves as Finance Advisor to the Ministers of Finance from the world’s 55 most climate vulnerable countries or the Vulnerable Twenty (V20) Group.

In her relatively short career so far, she has been credited with a number of wins, a testament to her strategic and collaborative approach. Those wins include a recent government-sanctioned moratorium on new coal-fired power in her home country of the Philippines and the development of the Sustainable Insurance Facility at the V20.

Sara’s previous roles include advisory positions at the Climate Change Commission in the Office of the President in the Philippines, the United Nations Development Programme, the Asian Development Bank, and the World Resources Institute. She holds a master’s degree in finance from the Simon Graduate School of Business in the University of Rochester and a bachelor’s degree in economics from Knox College. She also sits on the advisory board of the Global Renewables Congress and Climate Smart Ventures.